LITTLE ROCK— Madison County Judge Frank Weaver has been awarded the Association of Arkansas Counties’ (AAC) 2019 Wes Fowler Advocacy Award for his “tireless work in boldly advocating for the counties of Arkansas.” Weaver was self-employed in the logging industry and served as fire chief and first responder for the Kingston Fire Department before running for retiring County Judge Wes Fowler’s seat in 2010. 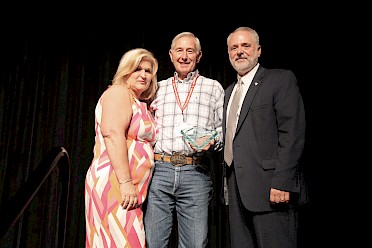 “I am very honored to receive an award like this — and very humbled that I was even considered for, let alone, chosen for it,” said Weaver. “I’m challenged by it as well to continue working in the direction of the person who this award was established for. His intent was for every county to succeed, and I want to continue doing that for as long as I can.”

The award was established in 2017 following the death of Fowler, who spent decades working in Madison County government before finishing his career at the AAC as Governmental Relations Director.The award will be given annually to a county or district official that has exhibited great passion for advocacy over the previous year. The AAC Board of Directors Scholarship Committee selects the recipient of the award. Recipients will receive an Arkansas County Diamond Award and will be honored in perpetuity at the Association of Arkansas Counties with a permanently placed plaque and names added each year.

In her presentation, Wise called Judge Weaver “an unassuming and humble person.” Villines reminisced about the friendship Weaver and Fowler shared and explained the reasons Weaver was selected to receive the award.

“They had a deep friendship, and both lived Godly lives. I will never forget Frank singing at Wes’ funeral and the love the two of them shared,” said Villines. “Frank has earned leadership roles within the County Judges’ Association of Arkansas, and he helped lead them to an incredibly successful 2019 legislative session as their president.”

Weaver and his wife, Beth, have been married for nearly 45 years. They have three sons.