LITTLE ROCK— Eddie A. Jones has been awarded the Association of Arkansas Counties’ (AAC) Inaugural 2018 Wes Fowler Advocacy Award for his “tireless work in boldly advocating for the counties of Arkansas.” Jones was a longtime Randolph County treasurer and former executive director of the AAC. He continues to serve county government in the role of consultant for the AAC.

"Winning the Inaugural Wes Fowler Advocacy Award caught me totally by surprise, but what a genuine honor,” Jones said. “Wes and I were good friends for many years and worked closely together on county issues right up to the time of his death. I have devoted 38 years of my life advocating for county government. County government has a special place in my heart and so does this award given in honor of my good friend." 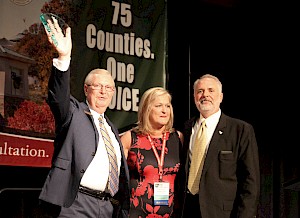 The award was established last year following the death of Wes Fowler, who spent decades working in Madison County government before finishing his career at the AAC as Governmental Relations Director.It will be given annually to a county or district official that has exhibited great passion for advocacy over the previous year. The AAC Board of Directors Scholarship Committee will select the recipient of the award.

Randolph County Circuit Clerk and AAC Board President Debbie Wise presented the advocacy award to Jones during the AAC’s 50thanniversary conference, held Aug. 8-10, 2018, in Rogers/Benton County. She said several things stood out about Fowler — his passion for advocacy, the boldness with which he defended county government, and that “when he became your friend, he was extremely loyal and cared deeply about you.”

Wise called Jones “the most obvious choice” to receive the inaugural award, “but because he is so unassuming and humble about his work in county government he often does not get the credit he deserves. Once labeled ‘A Walking Encyclopedia of County Government’ in an AAC magazine, this man has truly forgotten more about county government than most of us will ever know.”

AAC Executive Director Chris Villines explained that, though Fowler passed away in early 2017, the association was unable to present the inaugural award at last year’s AAC conference. As a result, the AAC Scholarship Committee made two selections to award at this year’s conference — one for the inaugural 2017 award and another for 2018.

“The winners of these awards will receive an Arkansas County Diamond Award and will be honored in perpetuity at the Association of Arkansas Counties with a permanently placed plaque and names added each year,” said Villines.

The 2018 Wes Fowler Advocacy Award was presented to retired Columbia County Clerk Sherry Bell. Bell began her county government career in 1982 as an employee in the Columbia County Assessor’s office. She was sworn in as County Clerk in January 1999 and served as an AAC Board member, AAC Legislative Committee member, and as president of the Arkansas Association of County Clerks.