The award was established last year following the death of Wes Fowler, who spent decades working in Madison County government before finishing his career at the AAC as Governmental Relations Director.It will be given annually to a county or district official that has exhibited great passion for advocacy over the previous year. The AAC 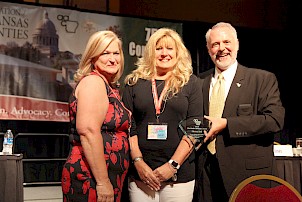 Board of Directors Scholarship Committee will select the recipient of the award. Recipients will receive an Arkansas County Diamond Award at the AAC’s annual conference and will be honored at the AAC with a permanently placed plaque and names added each year.

AAC Executive Director Chris Villines and Debbie Wise, AAC Board President and Randolph County Circuit Clerk, presented the advocacy award to Bell during the AAC’s 50thanniversary conference, held Aug. 8-10, 2018, in Rogers/Benton County. Villines said Bell “probably never envisioned as a child in Chicago that she would someday be a revered county official in Arkansas.”

Bell began her career in county government in 1982, when she was hired to work in the Columbia County Assessor’s Office. She became a Level 4 Appraiser during her 15-year tenure in that office. She was unsuccessful in a bid for county treasurer in 1996, but ran for county clerk in 1998 and was elected.

Villines called Bell “self-driven” and “persistent.” She was sworn into office in January 1999 and “since then she has advocated tirelessly, as an AAC Board member, AAC Legislative Committee member, and president of the Arkansas Association of County Clerks,” Villines said.

“Like Wes Fowler, who had a broad knowledge of several offices in the county, Sherry is a Swiss army knife of a courthouse with an understanding of many facets,” he said.